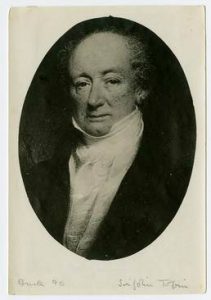 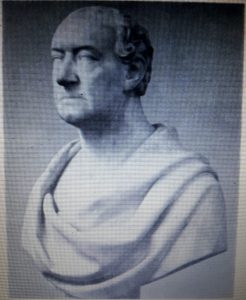 Wealth accrued by Liverpool’s slave traders totally transformed the built environment of the town and changed the landscape of the port on the Mersey forever, but the legacy of Liverpool’s slave trading history is also displayed on the Cheshire side of the river.
Sir John Tobin (1762-1851), was a slave ship captain, owner and privateer. His knowledge of West Africa and its trading routes led him into the very lucrative palm oil business, after the slave trade was abolished by the British in 1807. The links he had created with African slavers, such as the Old Calabar merchant, Duke Ephraim, during his slave-trading days were put to further profitable use in acquiring this ‘legitimate’ African trade good, although it would almost certainly have been enslaved people who would have harvested and processed the nuts on the palm plantations of what is now south-eastern Nigeria. The demand in Britain for palm oil during the early years of the nineteenth century, more than made up for the loss of the trade in human beings for the merchants involved. Palm oil was needed for candle-making, as the increase in the population of Lancashire brought about by the growth of industry, meant that traditional tallow suppliers could not keep up with demand. Lubricants were also needed to oil the machinery that was revolutionising Britain and as the incomes of those toiling at the machines improved, so the demand for soap increased. John Tobin was at the forefront of this new trade in palm oil and by 1819, his increased wealth had allowed him to buy the palatial Oak Hill House, West Derby, former home of the slave-trading Watt family. That same year he was elected Mayor of Liverpool and in 1820 was knighted by George IV, on his accession to the throne. In 1835. Tobin moved to the Wirral. to the newly built Liscard Hall and on the outskirts of the estate, he erected St. John’s Church, Liscard. The grounds of Liscard Hall became Wallasey’s Central Park when the local corporation bought the estate in the final years of the nineteenth century and the house itself would become Liscard Science and Art College. Unfortunately, after lying empty for some time, the hall was burnt down by vandals in 2008 and had to be demolished.
The friendship between the two former slave traders, John Tobin and Duke Ephraim, was solidly expressed when Tobin had a polished brass throne weighing 148lbs cast in Liverpool and sent out to Ephraim in Calabar. It was inscribed with the following words:
THIS CHAIR
Presented by Sir JOHN TOBIN
to his friend
Duke Ephraim, King of OLD CALABAR
Liverpool, September 10, 1826
Sir John Tobin was a founding member of the Royal Institution and he invested in two shares. Family member Thomas Tobin was also a founding member of the Royal Institution and invested in one share.
rathbone family
horsfall family